Why Facebook’s Stock Dropped. Is it Time to Buy?

Why Facebook’s Stock Dropped. Is it Time to Buy?!?

Shares of Facebook recently took a huge tumble to the downside. We saw their stock fall 26%, the largest drop they have ever seen within a single trading day. The way they gapped down on the chart is crazy to see. Their current earnings were not terrible by any means, but there are a few things to look at for the future. First, we will go over the many reasons why their stock is falling and then look at key fundamentals to see if this company is still a buy or not. We have a lot of crucial information to go over.

What’s Wrong with Facebook? Why are They Falling?
There are a few pretty big reasons why Facebook has been falling down. As mentioned above, they had decent earnings over the past quarter, but they expect that to slow down quite a bit. According to this CNBC article, They are forecasting their first-quarter revenue at $27-$29 billion, under analyst expectations of $30.15 billion, according to Refinitiv. Apple’s iPhone privacy changes are expected to hit Facebook’s revenue for around $10 billion this year. That’s a pretty large number, mainly because the privacy changes affect their ad revenues.

We also cannot forget the rampant inflation that has been going on. All of the social media stocks like Snapchat, Twitter, Pinterest, and more have also been falling down. But another huge reason is the supply chain shortages that have been going on. Initially, you would think supply chain issues can’t hurt an online social media company, but it all comes down to the ad revenue. There have been shortages of almost everything over the past year. Companies who have a shortage of their products aren’t going to spend on advertising just to have their products back-ordered. This decrease in advertisement has a giant impact on Facebook’s revenues. This goes to show how everything is connected within the market. Some have speculated that Truth Social or $DWAC have the potential to disrupt the social media industry too. 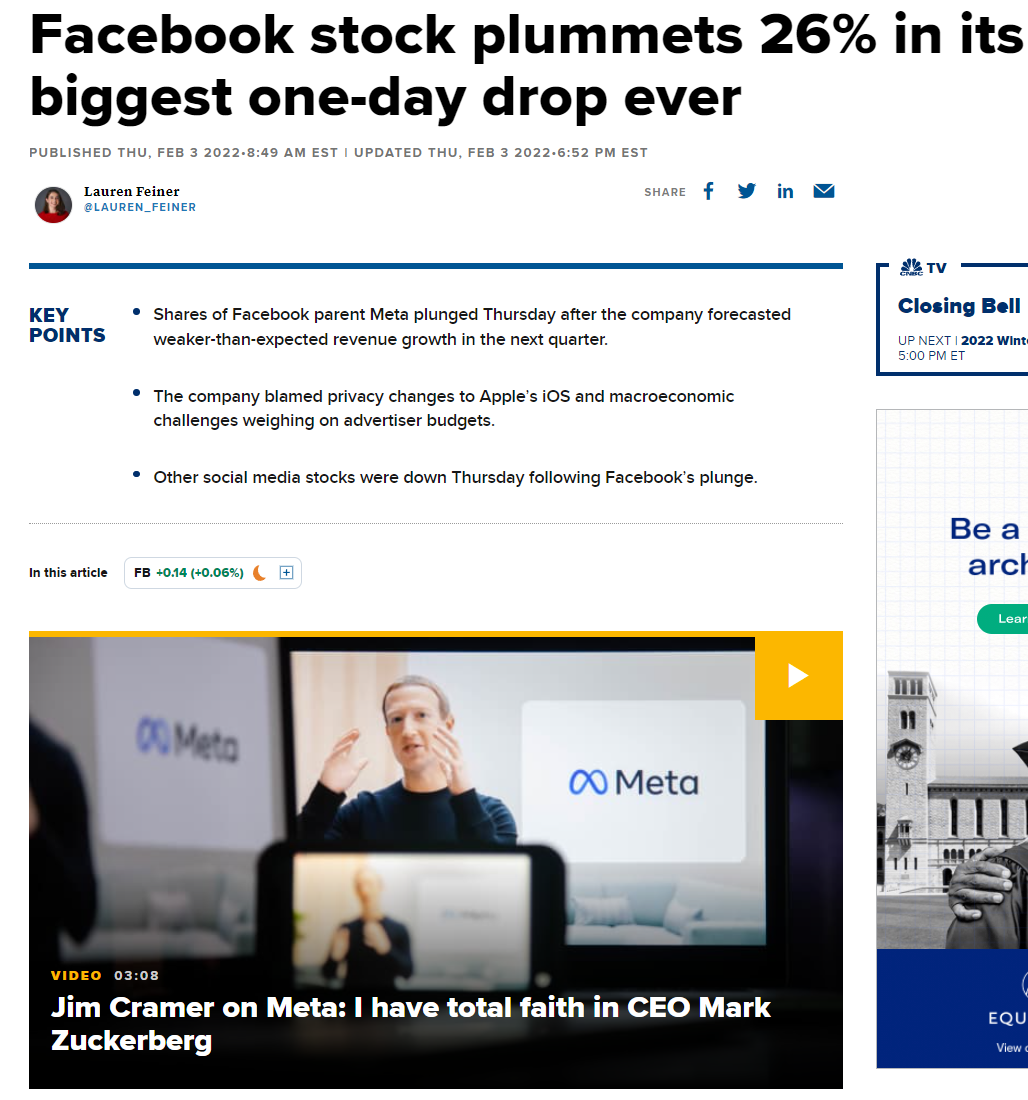 Facebook has had some of the best fundamentals in the market over the past decade. Of course, this doesn’t mean that the growth will keep happening at these rates, but they have been on fire. Whether you like Facebook or not, you can’t deny they make a ton of money very consistently. On the chart below, you can see that in 2014 they had around $12 billion in revenue. In 2021, Facebook sat just under $118 billion in revenue. That is some pretty crazy growth. Even from 2020 to 2021, their growth was insane.

Using our new Stock Analysis Dashboard, you can really see Facebook’s growth. The dashboard is extremely useful for looking at a company’s fundamentals so you can determine whether or not to buy their stock. It’s an amazing tool that the entire StockedUp team uses on a regular basis. It’s reassuring to see how well Facebook did in 2020 and 2021 on these graphs right after the pandemic. They are cash flow positive, they can easily pay off the little debt that they have, and their revenue is constantly growing. Facebook is a powerhouse. You can even see in the quarterly chart below, that they have been doing very well over the past year also. 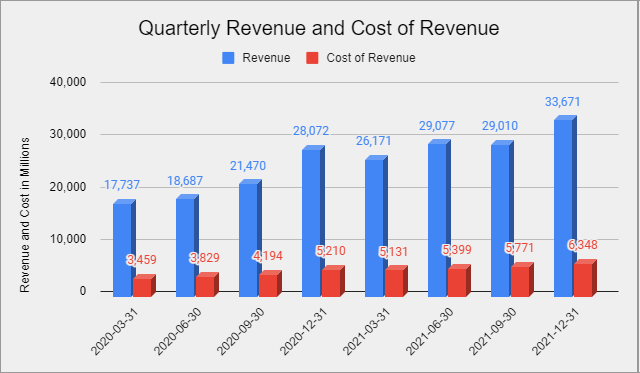 Looking at their price/sales ratio and all of the other fundamental data, we believe Facebook stock is at a reasonable price point to buy after this recent dip. We are seeing very consistent profits with Facebook and they are constantly innovating. They just changed their company name to “Meta”, so they are not even technically called “Facebook” anymore. They own Oculus, which makes VR headsets that should do well with the metaverse. The metaverse is an exciting place, and of course, “Meta” (formerly known as Facebook) will play a huge role in its development. Facebook has also been growing in the AI industry. There is so much potential for the long term when you start diving into everything that Facebook/Meta has been doing. 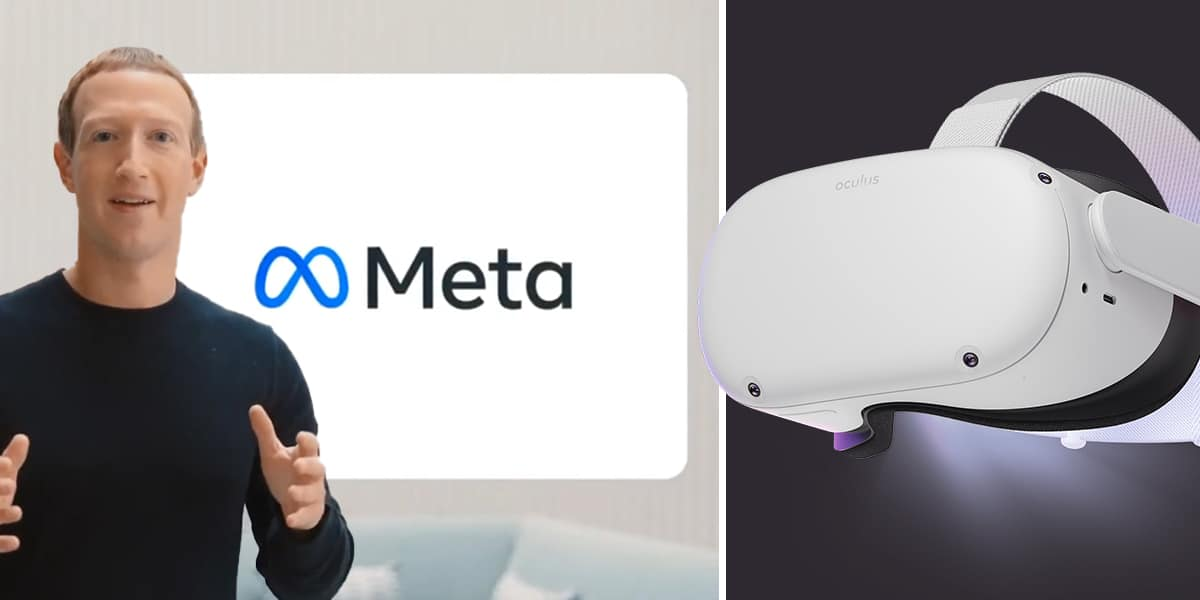 Since Facebook took this huge tumble, they have approached and bounced off of major support levels around $220. They touched the crucial $220 level back on July 25th, 2018, again in Jan/Feb of 2020, and lastly on August 29th/July 1st of 2020. I circled the individual bounces so they are easier to see on the chart. $220 has been a key support level over the past few years and we’re back at it. 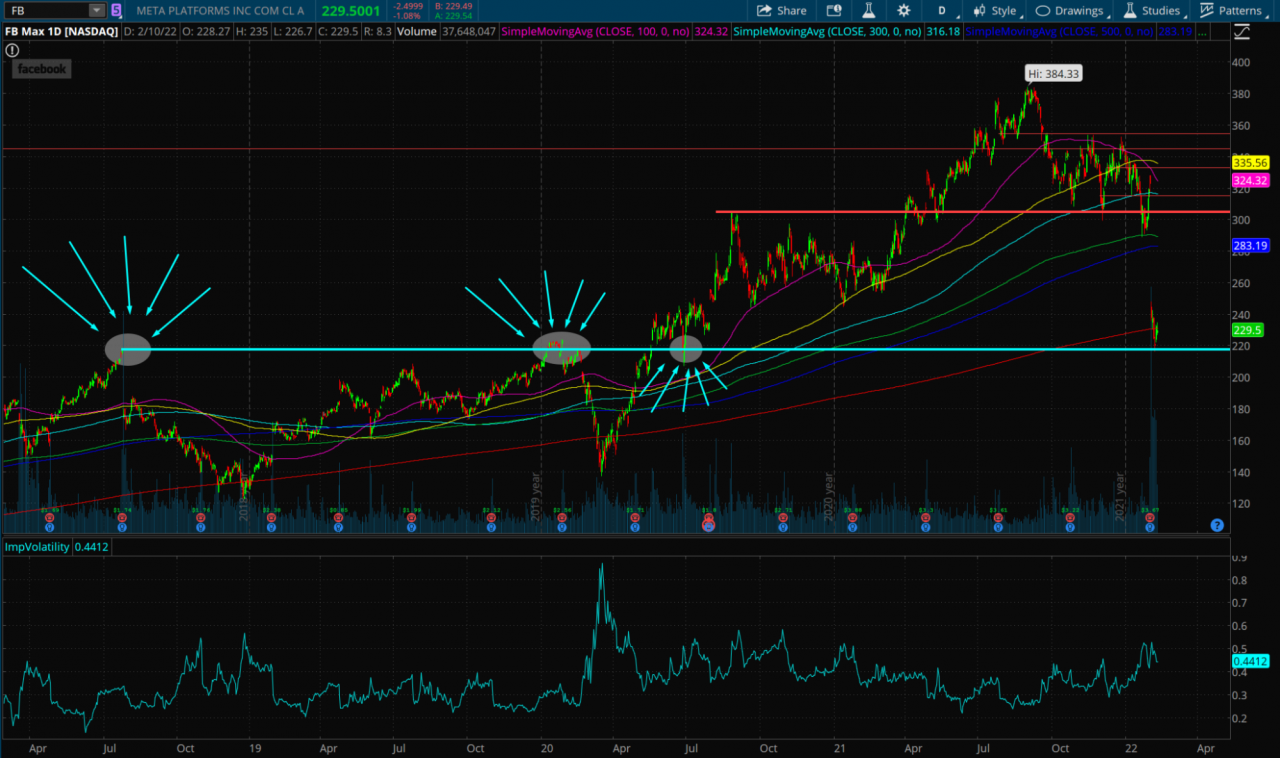 If we do fall through the $220 support, that doesn’t mean to just sell out of your Facebook shares. $200 is still a solid level after $220. Buying a great company at a 40% discount from highs is amazing. It is hard to pass up this opportunity since their fundamentals are solid. The technicals are lining up well for a longer-term play too. There is a huge gap to fill from $240 back up to $300. Realize it might take a while before recovering, so plan on holding for a while if you do buy in.

While Facebook or Meta might not explode right away, sometimes it takes a while to recover. We really like Facebook for shares or short puts down here at the lows. Getting into long-term positions will be key on Facebook and other beaten-down tech stocks. Just be prepared to hold. Facebook has a lot of great reasons why you should buy them, like their fundamentals being sound, their technicals lining up, and because they innovate all the time. It’s hard to pass them up when looking at everything together!

This might not be the bottom on Facebook, but getting shares and averaging in will be so important over the next few months. Shorting puts and then implementing the wheel strategy would be impressive for a play on $FB. Here is a great video showing you how to set that up!! You pretty much short puts, possibly get shares, then sell covered calls with the shares you acquire. It’s an excellent way to play stocks for the long term and while having the odds in your favor. It can seem daunting to newer traders, but the time and effort put into learning the wheel will most definitely pay off.